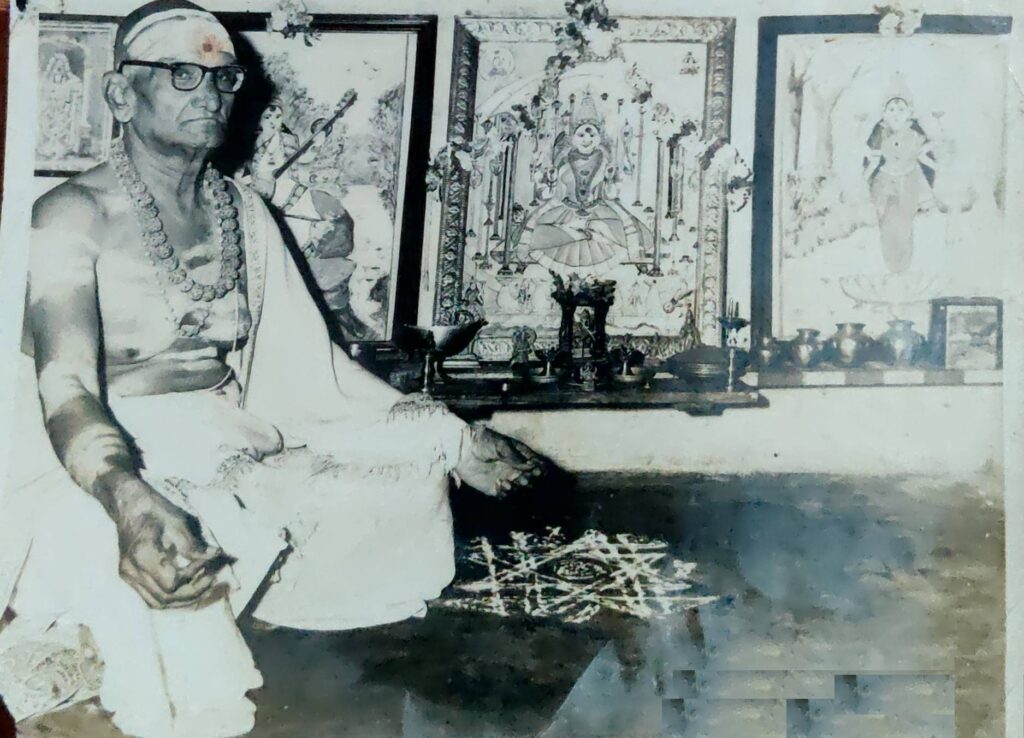 He moved to Chennai in the year 1917 to pursue a BA degree in Maths from the Pachaiyappa’s College; and later completed his Bachelor of Law from Tiruvananthapuram.

He was married to Sri Champakalakshmi in the year 1920.

Sri Champkalakshmi was proficient in Sanskrit, Tamil, Telugu, Kannada, English, Urdu. She was also adept in classical singing and playing the violin.

Sri Kamakshi Dasa records in his journal of a divine vision wherein Sri Champakalakshmi was none other than the divine incarnation of Sri Meenakshi Amman herself.

Sri Kamakshi Dasa’s life turned towards spirituality while he was in Tiruvananthapuram.

He was religiously inclined even as a young man. Guided by his senior and his father-in-law, he became an ardent devotee of Lord Subramanya.

It was the year 1926, at the age of 26, he had a dream in which Goddess Kamakshi Devi appeared before him and ordained to write songs in her praise. As soon as he got up, he painted the sketch of Sri Kamakshi Devi as seen by him in his dream, in water paint and started worshipping the same.

The painting is still worshipped by his disciples and remains as fresh as ever. He was given the title ‘Kamakshi Dasa’ by the Pontiff Paramacharya of Kanchi Kamakoti Peeth in 1931.

He founded the Murugan Thiruvarut Sangam in Triplicane in the year 1954.

He has written many philosophical works in Tamil and English, and are popular among the devout in Tamil Nadu and all over India.

The life history and divine incidents, as endorsed by Sri Dasa are recorded in the biography “Mahatma Kamakshi Dasar” , written by his chief disciple Sri. R. Kalyanaraman, and was published in 1981.